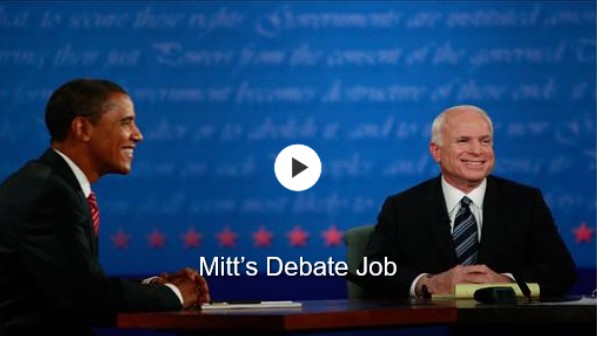 DENVER — About half of Americans would appreciate it if Gov. Mitt Romney and U.S. President Barack Obama could be civil to one another when they debate at the University of Denver on Wednesday evening.

Yes, civil, as in courteous and polite. No disrespect. No backbiting. No cheap shots.

In a poll released Monday, 48% of likely voters said the candidates’ civility will be an important factor in how they vote. This is a surprising number given the general incivility of a national political discourse dominated by talk radio and partisan TV-news pontificators.

Tired of the wisecracks

Many voters are tired of the wisecracks as serious crises fester, from high unemployment to the looming fiscal cliff that might throw the nation back into a recession, Honan said. They want the two candidates to clearly compare and contrast their positions, agree to disagree, and respect what the election decides.

I put myself in the other half of voters who don’t really care if the candidates are civil to each other or not. Currently, our electoral system involves awarding the presidency to the best speech giver. Why not give it to the best insult hurler instead?

So far, the race for the highest office of the land has hardly been characterized by civility, from super-PAC attack ads to the harsh words from the candidates themselves. If voters really want these guys to be nice to each other, why do these tactics work?

Romney recently outraged Obama with a birth-certificate quip. Obama has never relented in characterizing Mr. Romney as a vulture investor out of touch with the pains of ordinary people. “It’s nice to be here in the nice, vast Hilton ballroom,” Obama said at the White House Correspondents Dinner in April. “Or, as Mitt Romney would call it, a fixer-upper.”

Face to face, the candidates will find it difficult to be so gratuitously insulting.

“A debate is something that calls for the candidates to show character,” said Buie Seawell, an ethics professor at the University of Denver’s Daniels College of Business. “It’s not like tweeting. It’s not like trash talking.”

So far, Obama is considered the more civil of the two candidates, according to the survey, with 55% calling his campaign tone civil and 42% calling it uncivil. Only 45% called Romney’s tone civil while 49% called it uncivil.

Vice President Joe Biden was seen as only slightly more civil than Romney’s running mate, Paul Ryan, according to the survey.

With so few votes up for grabs as the election nears, what Honan calls “the civility gap” could make a difference, he said.

Civility, however, has more or less been on the decline with the economy, according to Honan, who has conducted several public-opinion polls on the issue.

It’s not just the politicians

One out of four people he’s surveyed has left a job and one out of 10 has moved out of his or her neighborhood because of uncivil behavior.

“The political discourse has infected all other aspects of American life,” Mr. Honan said. “It’s not what people want.”

It’s not difficult to find examples in the news, from cyber-bullying teens to adults who trample each other to get into the stores on Black Friday.

Blasting horns, riding tailgates, flipping birds. I wonder how many more examples we might find among the people on Wednesday when Colorado’s Interstate 25 is shut down for five hours so these two candidates can have their polite little debate.

I swear, if I get stuck in that gridlocked traffic, I’m not voting for either one of these guys.