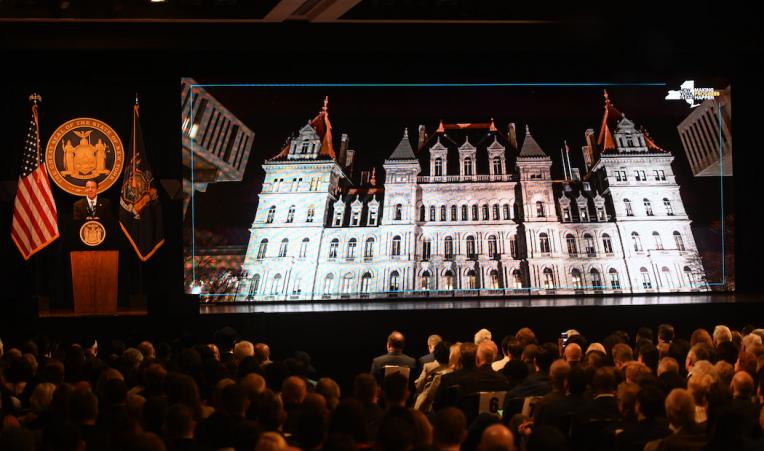 Poll: What New York political insiders thought before the pandemic

There was widespread agreement on what would actually get done in Albany before coronavirus hit.
By ZACH WILLIAMS | MARCH 23, 2020
https://www.cityandstateny.com/articles/politics/new-york-state/poll-what-new-york-political-insiders-thought-pandemic.html

When Gov. Andrew Cuomo laid out his budget priorities in January, the biggest question mark was how he would close a $6.1 billion budget gap. But the rising coronavirus epidemic has rapidly transformed society – and the political calculus in Albany – in just a matter of weeks. People are hurting. The economy is tumbling. Workers are getting laid off.

In the midst of the crisis, the state budget – as well as measures like paid sick leave, cash bail, health care funding and school aid – could be wrapped up as soon this week as Cuomo and legislative leaders push for passage of the state budget.

Looking back, a lot has changed, but the fate of some issues has stayed the same.

At the beginning of March, City & State partnered with Honan Strategy Group on a survey of First Read readers that provides a statistical snapshot of where things stood as the coronavirus outbreak began in the Empire State. Was the state heading in the right direction? What policies issues did political insiders think would be addressed? What state legislative proposals would pass in 2020?

A total of 200 people took part. “If you’re talking about a niche audience, like this group of insiders, anywhere north of 150 is viewed as something that is statistically reliable and verifiable,” said Bradley Honan, president and CEO of Honan Strategy Group, which conducted the online survey. Honan has previously worked with Hillary Clinton, Michael Bloomberg and state Comptroller Thomas DiNapoli.

The overwhelming majority of respondents work in politics in one form or another, whether they are elected officials, staff, lobbyists or journalists. They come from all over the state, though about three-quarters of them live in the downstate area and 87% of respondents are Democrats.

Here are three takeaways from the survey:

There was consensus on what would get done

New Yorkers are not known to be wishy washy types, and that held true among respondents. It’s not that they necessarily agreed on the issues, but solid majorities shared similar views on the fate of many policy proposals. This held true whether the topic was bail, New York City Mayor Bill de Blasio or whether Cuomo would be able to shift Medicaid costs to localities.

Before coronavirus became the dominant issue, the controversy surrounding cash bail was a top object of attention from the news media. Political insiders, however, were more focused on other issues.

People are much more divided on Cuomo than de Blasio

This loosely parallels public polling of the two elected officials’ popularity. Significant percentages among the respondents had very different ideas for example on how the governor would handle his relationship with the real estate industry.