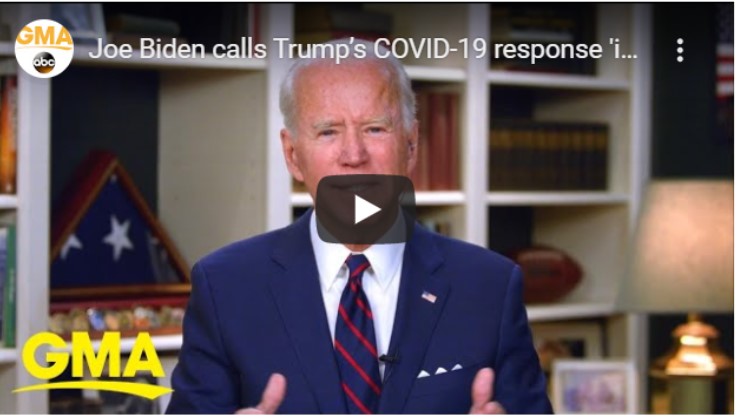 WASHINGTON (Sinclair Broadcast Group) — President Donald Trump continues to spend much more time in the harsh spotlight of the 24/7 news cycle than likely Democratic opponent former Vice President Joe Biden, and his frequent jousting with reporters may be taking a toll on his reelection prospects while Biden at least temporarily benefits from staying out of his way.

Since Monday morning, President Trump sent more than a dozen tweets attacking “Meet the Press” host Chuck Todd for misquoting Attorney General William Barr, told a Chinese American journalist to “ask China” when she pressed him about his coronavirus response, lashed out at the media on Twitter after abruptly walking out of a press conference, and accused “Morning Joe” host Joe Scarborough of murder.

Biden made his first national media appearance in several days with a relatively cordial interview with “Good Morning America” anchor George Stephanopoulos. After some occasionally tough questions, Biden closed the interview asking, “How you feeling, man? You doing OK?”

The vastly different interactions Trump and Biden have had with the press over the last 24 hours highlight a disparity in both the amount of media attention they get and their relationships with the reporters they do speak to that could have a bearing on how the 2020 campaign plays out in the coming months.

“For Trump, the challenge is that he is in the spotlight – but the critics’ reviews have not been kind,” said Democratic strategist Bradley Honan. “Biden, however, is fumbling around backstage, trying to find the entryway to the stage and, with that, the klieg lights and attention that he craves – and desperately needs.”

Biden has accepted only a handful of national media interviews in recent weeks with hosts who are mostly amicable, if not outright supportive of his campaign. Trump faces a horde of adversarial journalists on a nearly daily basis, often for more than an hour at a time.

Trump’s constant exposure is partly a function of being president during a global pandemic and partly a result of his unwillingness to cede control of White House messaging to others. He often monopolized the microphone at coronavirus task force press conferences even when questions were directed to other officials, and he continues to spar with reporters regularly after the administration cut off those daily briefings.

Experts say the prestige of the presidency should give Trump an enormous advantage over Biden, but his behavior has at times turned the bully pulpit of the White House into a liability. Biden’s mistakes in his Delaware basement barely garner anyone’s attention, while Trump’s frequent missteps drive news cycles and lead to Clorox issuing public warnings against injecting bleach.

“Biden benefits because Trump is the news and a distraction, so he doesn’t have to be in the public view and risk gaffes,” said Don Irvine, chairman of conservative watchdog group Accuracy in Media.

What was meant to be a Rose Garden victory lap over the U.S. stepping up coronavirus testing capacity at Monday’s event was waylaid by questions over Trump’s vague and unsubstantiated “Obamagate” allegations against President Barack Obama and his contentious interaction with Weijia Jiang of CBS News.

“Trump has hurt himself very much with the overexposure and the erratic performances he’s had, from the Rose Garden to the briefing room,” said Frank Sesno, a former CNN Washington bureau chief and director of the School of Media and Public Affairs at George Washington University.

Presidents typically gain ground politically from leading the nation through a crisis, and the White House provides Trump with a platform no Democrat can compete with, including Biden. Yet, the former vice president’s supporters are generally thrilled to see Trump take up as much airtime as he wants if this is how he uses it.

According to Honan, incumbent presidents have historically been well-positioned for reelection unless the economy tanks or the public loses confidence in their ability to do the job. Trump is now at risk of falling into both of those categories as he struggles against the economic and political devastation wrought by the virus over the last two months.

Given all that, some say headlines about the president sparring with reporters might be more appealing to Trump right now than news on the rising death toll, lost jobs, and an uncertain future.

“In the president’s mind, it is much better for the media to cover his yelling at them than it is to have them discuss 80,000 deaths, economic recession/depression, and the total absence a plan to move forward,” said presidential historian Julian Zelizer.

Some of Trump’s complaints about the press have at least an element of validity. NBC’s editing of Barr’s comments on “Meet the Press” did distort his meaning, but the error falls far short of justifying the Federal Communications Commission investigation of Chuck Todd that the president demanded.

“Trump’s base loves his attacks on the media and in most cases they are justified,” Irvine said. “He has been very effective at convincing them that the media largely reports ‘fake news’ and it has stuck.”

Trump has bristled at tough questions and lobbed personal insults at reporters many times before, but tensions are rising. The president’s supporters maintain reporters have been unduly hostile to him in press conferences and his pushback is appropriate.

“This is coronavirus press conference number, what, probably somewhere in the 50s? POC liberal women have been present at every one of them and asked stupid questions. Sometimes for HOURS,” Trump campaign senior legal adviser Jenna Ellis tweeted. “This is the first time he’s just walked off. Finally.”

However, journalists say they are just doing their job trying to hold public officials accountable for their response to a pandemic that has killed more than 80,000 Americans. Allowing each other to ask follow-ups is not “conspiring” against him, as he alleged on Twitter Monday night.

According to Sesno, it is unreasonable for Trump to expect to use the megaphone of the White House without being subject to the increased scrutiny that comes with it.

“Is it a fair criticism that the media are not bringing the same scrutiny of Biden as they bring to him, the president? No, that’s ridiculous,” he said. “Biden is not responsible for anything right now except his basement. Trump is responsible for the country.”

In the “Good Morning America” interview Tuesday, Biden acknowledged he had limited his public exposure and campaign activity, citing recommendations from public health experts. Staying below the radar might not be sustainable through the summer, but he insisted keeping a low profile has worked for him so far.

“Everybody says, you know, Biden’s hiding,” Biden said. “Well let me tell you something, we’re doing very well. We’re following the guidelines of the medical professionals, we’re following the guidelines of the experts, of the Dr. Faucis of the world. We’re doing very well. Matter of fact, we’re winning, if you’re looking at all the polling data.”

The former vice president has not entirely escaped the media glare, as questions continue to swirl around a one-time Senate staffer’s sexual assault claim. Reporters have increasingly pressed for him to release sensitive records from his Senate years that he says would not include any relevant information.

“The great irony is that the claim of sexual assault meant, for the first time in a while, that the country actually wanted to hear from Biden – he was able to be relevant and topical – something that has eluded him for a while,” Honan said.

Biden’s occasional moments in the media’s crosshairs do not seem to be doing him much good, based on new polling. While his lead over president Trump has held steady, he has seen a notable decline in favorability in recent weeks.

A Morning Consult poll released Monday found Biden’s net favorability has fallen 5 points among registered voters since late April, with about two-thirds of voters saying they had heard some or a lot about the allegations. Biden is still more popular than Trump, though, and he is leading the president by 3 points head-to-head, with a 46%-14% edge among voters who dislike both candidates.

Still, Cohen said the downturn in favorability should be worrisome for Biden’s campaign. If this scandal gets traction in the press, it could drive down Democratic turnout and help Trump turn the election into an unpopularity contest as he did with Democratic nominee Hillary Clinton in 2016.

“This period for him is important because he needs to have others push back on the case in addition to himself or, at the very least, not expand into a full-fledged investigation,” he said. “If that happens, this story is with us for the remainder of the campaign and it hurts Biden with his natural base who he needs to be excited about him to donate money and be there on Election Day either in-person or by mail.”

The dynamics of media coverage will surely shift as the election draws nearer. Trump will always face the dual challenge of defending his record over the last four years and laying out his agenda for the next four, but Biden’s record and plans should face stricter scrutiny after the conventions, whatever form they take this year.

“The president will always receive more media scrutiny than his opponent, especially during this pandemic and there is nothing wrong about this as long as they are doing it in the interest of fairness and not to sway the election to Biden,” Irvine said. “However, that doesn’t mean that Biden should avoid any scrutiny from the media on issues and actions that the voters should be fully informed about.”

For now, picking fights with the press appears to be a deliberate strategy for President Trump. In his tweets Monday night, he explicitly framed the election as a battle with the “Lamestream Media.”

“It’s been his brand throughout his career,” Cohen said. “It does not really move anyone new but it helps him hold onto his base while negative information about the virus is pervasive.”

Running against the media has worked for Trump before, but in what is likely to be an extremely close election, experts say it might backfire with key voters who have greater concerns at the moment than how reporters treat the president.

“Is this messaging, while it may energize parts of the base, proving to be sufficiently tiresome to other parts of the base, especially older voters?” Sesno asked, pointing to polls that show Trump’s support slipping among senior citizens who are most at risk from the coronavirus outbreak.

While Trump’s attacks on the press resonated with rank-and-file Republicans in 2016, Honan suggested the divisive rhetoric clashes with the current national mood of unity and togetherness stemming from the public health crisis.

“Trump needs to decide if in this new environment this is still a base election or whether he needs to reach out and persuade swing voters,” he said. “So far, all the evidence is that he believes the former is the winning strategy. But there is mounting evidence that may no longer be the case.”