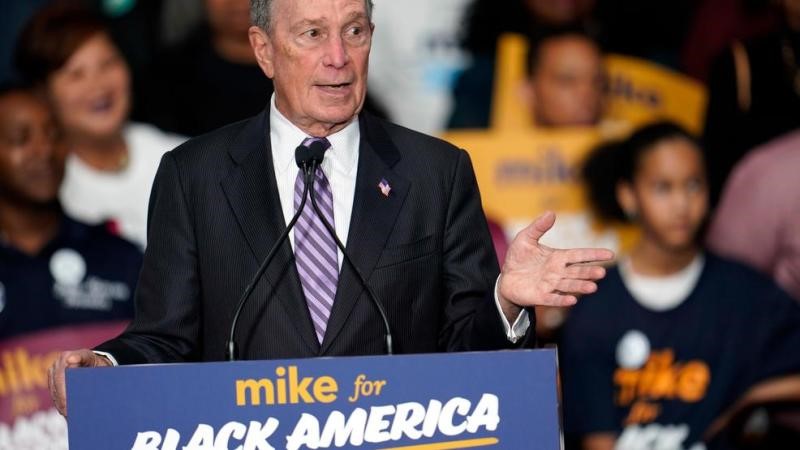 Bloomberg qualified for the debate Tuesday after an NPR/PBS NewsHour/Marist poll showed him in second place with 19% support nationally, 12 points behind Sanders. Bloomberg surpassed former Vice President Joe Biden, who fell nine points since December to 15%, and Massachusetts Sen. Elizabeth Warren, who dropped five points to 12%. Sen. Amy Klobuchar of Minnesota gained four points to 9%, but South Bend Mayor Pete Buttigieg, who is currently leading the field in delegates, plummeted from 13% to 8% in two months.

The debate, taking place days before Saturday’s Nevada caucuses, will be the first Bloomberg appears in after the Democratic National Committee changed requirements to participate, and his opponents are eager to confront him. With the prospect of a contested convention looming, Democrats are hoping the next few weeks provide clarity that has so far been lacking in the race.

The latest poll reflects trends that have been apparent since Buttigieg and Sanders topped the chaotic Iowa caucuses and Sanders declared victory in the New Hampshire primary. Bloomberg, who announced his candidacy in November, is not participating in the first four contests and is banking on massive spending to carry him through the delegate-rich states that vote on Super Tuesday, March 3 and beyond.

Much of Wednesday’s debate—hosted by NBC News, MSNBC, Noticias Telemundo and The Nevada Independent—will probably sound familiar to those who watched any of the previous eight primary debates: questions about Medicare for All, clashes over immigration and climate change, concerns about socialism, and attacks on President Donald Trump. Bloomberg’s presence and the timing of the debate less than two weeks before Super Tuesday could shake things up and shift the dynamics on the stage, though.

“I think the question is: how is success going to be judged?” said Democratic strategist Bradley Honan. “Is it going to be zingers or is it going to be substance? The electorate is hungry for substance and looking for the candidate who can beat Donald Trump.”

Bernie Sanders
Sanders enters the debate as the undisputed frontrunner, leading in popular vote totals and fundraising and well-positioned for a likely victory in Nevada and a possible win in South Carolina. With the centrist wing of the Democratic Party split between several candidates, the 78-year-old democratic socialist’s ascent to the nomination could soon become difficult to stop.

“Moderates are going to have to go after Bernie,” said Aaron Kall, director of debate at the University of Michigan and editor of “Debating The Donald.”

Bloomberg has already made clear he views this race as a contest between him and Sanders, and Sanders has shown no hesitation to take aim at Bloomberg, repeatedly accusing him of trying to buy the nomination in recent days. Bloomberg’s campaign has also singled out some Sanders supporters on social media, accusing the candidate of not doing enough to police the so-called “Bernie bros” harassing his critics online.

“What you’re starting to see here is he has built what I would call a coalition of the angry… The challenge for him is to show he can truly unite the Democratic Party, and so far, there’s not much evidence of that,” Honan said.

Still, Sanders’ growing popularity and loyal following present a conundrum for other candidates. Attacking him too overtly risks alienating the party’s progressive base, but laying off him to avoid a backlash from the left could just let him coast to victory.

“There is some risk in attacking Sanders, but it’s small and I think manageable,” said Jacob Thompson, coach of the policy debate team at the University of Nevada, Las Vegas, noting the most diehard Sanders supporters refused to support nominee Hillary Clinton in 2016 and are unlikely to get behind another Democrat if he loses this time too.

Michael Bloomberg
Bloomberg is walking onstage in Las Vegas with an even bigger target on his back than Sanders. In three months as a candidate, he has spent nearly a half-billion dollars of his own money running ads and hiring staff across the country, vaulting into the top tier of candidates without even participating in a primary or debate.

The $350 million worth of ads Bloomberg has blanketed across social media and television have painted a bright picture of an effective and passionate crusader for liberal causes, an ally of former President Barack Obama, and a champion of black communities. For audiences unfamiliar with the former Republican mayor’s record, Wednesday night will be his opponents’ first chance to challenge that image.

“I was betting he wouldn’t debate even if he qualified,” said Allan Louden, former director of the debate program at Wake Forest University and editor of “Navigating Opportunity: Policy Debate in the 21st Century.”

Bloomberg, who has bristled at difficult questions in the past and has not participated in a public debate since 2009, has reportedly been practicing with his staff, preparing to face intense scrutiny from moderators and fellow candidates. He is certain to be pressed on several controversies involving his past statements and positions, including allegations of sexism and racism and a history of financial support for Republican candidates.

“He has to deliver that he’s the candidate in these great ads,” Kall said.

Though the campaign has touted his qualification for the debate as proof of a “groundswell” of support, former Bloomberg aide Arick Wierson suggested in a CNN op-ed that the former mayor has more to lose from debating at this point in the race than he stands to gain.

“Anything less than a home-run performance will raise questions about Bloomberg: Despite his overwhelming financial advantage and solid track record governing New York City for twelve years, does he have the raw political chops necessary to motivate Democrats increasingly nervous about their party’s ability to remove Trump?” Wierson said.

Joe Biden
After disappointing showings in the first two states, former frontrunner Biden is fighting for survival, banking on loyal supporters in Nevada and South Carolina to boost him back into contention. He has stumbled in previous debates, but he may not be able to afford an underwhelming performance in Vegas.

“He is facing a couple of do-or-die moments,” Honan said. “The ‘electability candidate’ hasn’t won a single state or primary. He’s in desperate need of money.”

Biden’s electability argument is undoubtedly tarnished by his early losses, but it is not entirely invalidated. Even though the latest Marist poll shows support for Biden from Democratic primary voters slipping, he still holds the biggest lead over Trump head-to-head among all registered voters.

In a party where many voters are laser-focused on defeating the incumbent president, those numbers are hard to ignore. Biden is also likely to press his warning that nominating Sanders would endanger swing district Democrats in the House and undermine any hope of winning back the Senate.

Bloomberg appears to be the biggest beneficiary of Biden’s tumble in the polls, potentially supplanting him as the most viable moderate candidate and even advertising his own ties to President Obama. Biden has already signaled concerns about Bloomberg’s record, so he might come out swinging more aggressively than he has in previous debates.

“He may have to just lead the charge and go after both [Sanders and Bloomberg] in an overt way, which isn’t his style,” Louden said.

Experts cautioned against counting Biden out. He has risen to the occasion in the past, most notably in the 2012 vice presidential debate, and he might be capable of delivering another surprise.

“It’s in there somewhere,” Thompson said. “We’ve seen Biden do incredibly well in televised debates before.”

Pete Buttigieg
Buttigieg finished in the top two in Iowa and New Hampshire, but that success has so far not translated into a significant bump in support elsewhere. He continues to struggle to appeal to African American and Latino voters, who make up much larger shares of the electorate in states set to vote in the weeks ahead.

“He needs to demonstrate he is able to move beyond a very narrow coalition of white, upper class, affluent professionals,” Honan said.

Based on the results in the first two states, most Democratic voters appear to want a moderate candidate, but they are fractured between Buttigieg, Biden, Klobuchar, and now Bloomberg. Buttigieg, a 37-year-old small-town mayor, needs to make a case that he is the one centrist Democrats should unite behind before it is too late.

“They’re really in the same lane,” Kall said of Buttigieg and Klobuchar. “He has to make sure he can out-debate her Between the two of them, only one may be able to emerge as a moderate alternative.”

Amy Klobuchar
Although most primary debates have had little lasting impact on the Democratic race, Klobuchar’s performance in the most recent debate has been credited for helping her surge to an unexpectedly strong third place in New Hampshire. She may be looking to replicate that effect in Las Vegas.

“Momentum can generate momentum if dealt with effectively,” Thompson said, suggesting the senator may try to take on both Biden and Sanders while also laying out a positive vision for the future.

Like Buttigieg, Klobuchar is far behind the leaders in the states voting in late February and early March, and she has little time and dwindling resources to change that. She also needs to make inroads with minority voters and overcome skepticism about her record on racial issues, and her inability to name the president of Mexico when asked recently did not help.

Experts say Klobuchar’s fate is also somewhat dependent on how others perform. A Biden collapse would offer her an opening, but if Bloomberg has a good night and comes across as reasonable, the rationale for her candidacy fades somewhat.

Elizabeth Warren
Warren’s supporters have complained that she has been marginalized and discounted by the media despite outperforming Biden in both of the first two contests. She could potentially channel that outrage in the debate to some effect.

“She has the option of being indignant for being ignored,” Louden said.

For much of the campaign, Warren and Sanders have had a sort of informal non-aggression pact, defending progressive priorities and criticizing centrists for their lack of vision. She now needs to make her case to both progressives and moderates that she can unite the party in a way Sanders cannot.

“Elizabeth Warren has the most incentive to attack Sanders because they’re vying for the same voters,” Kall said.

Having a multi-billionaire onstage who has already spent more than everyone else in the race combined out of his own pocket to advance his candidacy also hands Warren an obvious illustration of her income inequality argument. Her campaign has already pounced on Bloomberg’s characterization of the 2008 financial crisis, accusing him of supporting racist banking practices.

“I don’t think she’s dead in the water, but if she doesn’t do well again, I think her chances of getting the nomination decline precipitously,” Thompson said.

How much anyone’s performance Wednesday night will matter is hard to say. Viewership for primary debates has been slipping throughout the campaign, and this one begins an hour later than most, so many voters will likely only catch highlights on the news, if that. Meanwhile, Bloomberg intends to continue spending ten times more than any other top candidate promoting his message.

“Most people won’t see it,” Louden said of the debate. “What they will see is the 15 Bloomberg ads on social media and everything else.”