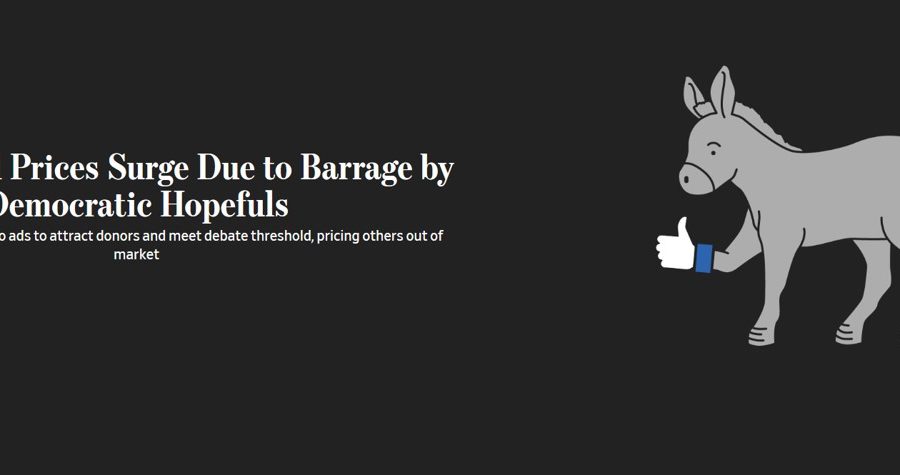 The cost of advertising on Facebook Inc. FB -0.32% to reach Democratic-leaning voters and donors is skyrocketing as presidential candidates try to qualify for spots in coming presidential debates.

The candidates were trying to boost their number of donors by Wednesday to 130,000, a threshold they must meet to appear in Democratic presidential debates in September and October.

Their advertising barrage has sent ad prices soaring for others who use Facebook to target the same Democratic-leaning slice of the electorate, from congressional and more-local political campaigns to advocacy groups, according to more than a dozen political ad buyers.

SHARE YOUR THOUGHTS
Have you seen political ads on Facebook? Did you take an action because of it? Join the conversation below.

In general, because Facebook’s ad systems are auction-based, higher demand for ad space drives up prices—whether measured in the cost per ad, or the cost to persuade a person to sign up for an email list or make a donation. Other factors that affect price include the type of creative content and the type of audience the buyer is trying to reach.

The AAPI Victory Fund, a political-action committee focused on turning out Asian-American voters, recently used Facebook’s advertising platform to try to boost its list of supporters and donors.

The group’s media-buying consultant advised that campaigns typically spend between $5 and $9 on Facebook ads to generate one email address. The group, however, soon changed its strategy after one Facebook push cost it about $279 per email sign-up.

“Our ad auction is designed to promote a diversity of advertisers—not just those who bid more,” a Facebook spokesman said. “It takes into consideration whether the ad will be interesting and relevant for the person seeing it.”

Since 2016, Facebook has added a number of disclosures aimed at making political ads more transparent and protecting election integrity. On Wednesday, it announced new updates to its guidelines, including requirements that make it harder for political advertisements to hide their backers and a refinement to the categories of social-issue ads that require special review.

It can cost more than $100 in Facebook advertising to get a donor to give $1 to a presidential campaign, a sharp rise from earlier this year, according to media buyers and digital campaign staffers. Among the 20 candidates running for the Democratic presidential nomination, about one-third still haven’t attracted enough donations of $1 or more to meet the Democratic National Committee’s debate threshold. Candidates also must reach 2% in certain polls under the requirements, which the DNC is implementing for the first time.

Billionaire Tom Steyer, who entered the race in July and reached the donor threshold in mid-August, had spent nearly $3.9 million through Friday on Facebook ads, the most of any Democratic presidential contender, according to Facebook. On Wednesday, Mr. Steyer fell short of qualifying for the nationally televised debate next month in Houston.

The AAPI Victory Fund, which works to engage and mobilize more Asian-Americans and Pacific Islanders, was expecting to pay a little more than it would for a typical campaign because its ads were targeted at a very specific audience. But the barrage of presidential ads sent prices far higher than it anticipated.

“I just didn’t have any clue it would price a PAC like ours out of the market,” said Varun Nikore, AAPI Victory Fund’s president. The organization is no longer running ads for email acquisition and has broadened the audience it targets on Facebook, which lowers the per-ad cost.

Political advertisers spent $92 million online in the roughly three-month period that ended Aug. 14, up 24% from the same period last year, according to digital-ad research firm Pathmatics. That included a substantial boost in social-media spending.

DNC spokeswoman Adrienne Watson said, “Demand for political advertising space was bound to increase in an election cycle with an unprecedented number of presidential candidates.” She added that the donor threshold also has led to record engagement in grass-roots fundraising for presidential and other races.

Facebook began sharing information on spending by political campaigns in mid-2018. Its database doesn’t cover the 2016 presidential contest, when 17 Republicans were competing for the nomination and didn’t have to meet a donor threshold to qualify for debates.

The push by Democratic candidates drew at least 2.3 million small-dollar donors to contribute to their campaigns in the first half of the year, according to a Wall Street Journal analysis of data from ActBlue, the online payment platform widely used by Democratic groups.

Andy Barr, managing director at progressive political-strategy firm Saguaro Strategies, said his firm, whose clients include Reps. Katie Porter and Katie Hill, both California Democrats, changed ad tactics in June because of the Facebook price surge. In some cases, the firm has locked in lower prices by buying Facebook ads through its partner networks. It also is changing ad types or advertising elsewhere instead.

Bradley Honan, chief executive of Honan Strategy Group, said his client campaigning for a local office in New York City decided to postpone donor list-building through Facebook until the presidential field winnows, when he expects ad prices to fall.

“Every presidential candidate is bombing New York City with fundraising appeals,” he said.

The spending required to get a user to sign up to an email list is generally much lower than the cost of getting a donation to a political campaign. But prices are rising. Taryn Rosenkranz, founder and chief executive of digital political firm New Blue Interactive, said one of her clients saw its cost-per-acquisition on Facebook more than double to $1.62 in 2019, compared with last year, while another client’s cost nearly tripled.

Cheryl Hori, founder at political consulting firm Pacific Campaign House, which works with the AAPI Victory Fund, tracked the cost per result for another national advocacy nonprofit client. In March 2019, it ranged from $3.46 to $15.41, up from 45 cents to 58 cents a year earlier, she said.

The Facebook price surge for Democrats has given Republicans an advantage, because the GOP doesn’t have a competitive presidential primary to drive up prices, said Reid Vineis, vice president of conservative digital ad-buying firm Majority Strategies. “We’re not seeing it on our side,” he said.

—Chad Day contributed to this article.