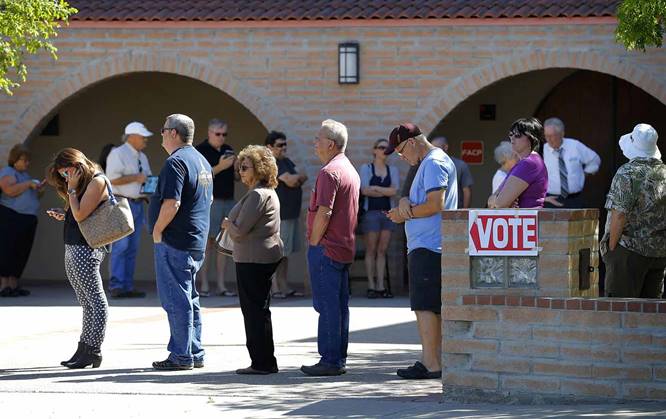 While Election Day can’t come soon enough for Democrats, longer term disappointment may sadly be in the air on Wednesday morning.

Let’s be clear, Democrats will hopefully win a huge number of races Election Day, including many ‘must win’ and tough Senate and gubernatorial races.  In general, we expect we will likely have a good Tuesday night.  However, our party will not perform nearly as well as we would like to (or should do) given the terrible Trump rollercoaster we have been riding on.  Indeed, we may be looking at 6 more years of Donald Trump in the White House and this reality needs to be forefront in our minds as we take in Tuesday’s election returns.

Despite the massive outpouring of grassroots enthusiasm, a tidal wave of non-traditional candidates (women, people of color and LGBTQ), protests in the streets and on social media channels, and record fund-raising for our candidates, Democrats have simply not found their electoral footing in the era of Trump – a trend that bodes very poorly for our prospects in 2020.  Indeed, many signs already point to Trump being on a path to getting reelected in 2020.  A big reason for this is that, fundamentally, our party has simply not found a strong and workable narrative against Trump outside of investigations and impeachments – neither of which are winning issues.

In thinking about the current electoral climate, there are four themes worth highlighting:

Despite nearly two years of incredible (and unprecedented) incompetence and terribly divisive leadership, Trump’s poll ratings have basically not budged – they stand remarkably stable from when he was first elected.  And much as Democrats hate to admit it, Trump stands today in a stronger poll position than either Obama or Clinton did at a similar point in time.  Yes, vital groups like college educated, suburban women appear to have turned away from Trump and the GOP, but it’s clear that Trump is a remarkably Teflon President – not much truly sticks to him.

Put another way, Democrats have been unable to take advantage of the corruption and mismanagement by Trump and turn that into a strong, coherent, and persuasive argument against him.  No matter how many races swing to our favor on Tuesday night, we cannot – and should not – deny this inescapable truth – Trump for the most part keeps outfoxing the Democrats politically.

Sunday’s Washington Post poll showed that the generic Congressional ballot has a Democratic advantage of just 7 points.  This is down from 11 points last month, and half the 14 point advantage Democrats enjoyed in August.  The NY Times and Siena College polling consortium shows Democrats and Republicans essentially tied in 30 toss up districts.  And why do all these numbers matter?  It matters because the Cook Political Report has suggested that Democrats will need at least a 6-8 point lead in order to overcome the significant gerrymandering advantage that the GOP enjoys in many states, as well as the intense GOP efforts to restrict the democratic voting access of poor and minority voters.

The Economy is Strong

While the economic gains of the past several years have not been felt by many Middle Class Americans, there is a sense that the economy has picked back up again in ways that it didn’t under Obama.  Overall growth is strong and the unemployment rate is as low as it’s been in generations.  Nevertheless, the reality is that wages haven’t risen very much and the Trump tax cut has only put a very modest amount of money back into people’s pockets.  While the stock market has indeed surged, most middle class families have a very small amount of equities and thus have seen little upside.  But nevertheless, there is a sense that the shackles have come off America’s economic engine, and Democrats have and will continue to have a hard time arguing that isn’t the case.

For the most part, Democrats have localized the races they are running in, but have done so at the expense of projecting a coherent and unified message about what we stand for as a party – in contrast to Trump and the Republicans – and Democrats have not clearly communicated what we will do if elected – beyond impeachment and investigations.  Nancy Pelosi recently talked about a possible Democratic Congressional agenda, but it seemed to focus on addressing voting rights and ending gerrymandering, and while those are criticalissues, they don’t speak to the electorate that we need to reach out and persuade.  Should Democrats win the House, our agenda cannot continue to be drowned out by calls for more investigations and Presidential impeachment.

Democrats should be heartened by the wins we will see on Tuesday night, but more important, our party needs to immediately figure out how to compellingly and effectively take on Trump and win in 2020 – our country is at stake.  Nothing is more important than developing a winning strategy and identifying the right message.