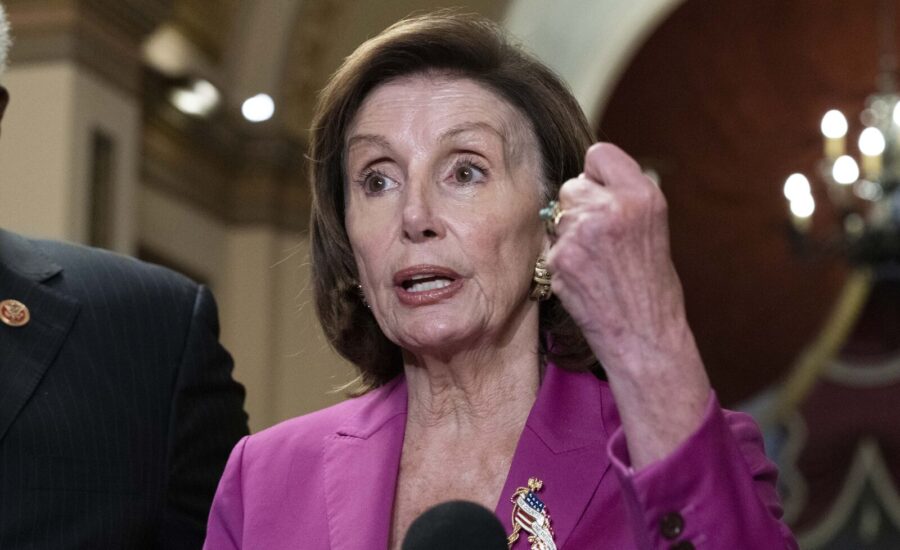 Inflation concerns loom over Democrats as they debate spending bill

WASHINGTON (SBG) — House leaders said Tuesday they aim to pass President Joe Biden’s “Build Back Better Act” this week, but some obstacles remain, including convincing moderates the plan is fully funded and convincing the public it would not exacerbate soaring inflation.

“We have, this week, before us the most important investments in our families and our people since the New Deal, and we will get that done,” Rep. Sean Patrick Maloney, D-N.Y., chair of the Democratic Congressional Campaign Committee, said at a news conference.

The House could begin debate as early as Wednesday on the $1.75 trillion measure, which would fund new social programs like universal prekindergarten, provide assistance with childcare and medical costs, and bolster efforts to fight climate change. However, a final vote would not come until after the Congressional Budget Office renders its verdict on the budgetary effects of the bill, expected to be released by Friday afternoon.

House Speaker Nancy Pelosi, D-Calif., has told Democrats she expects to pass the legislation before lawmakers leave Washington for their Thanksgiving recess. The bill would then move to the Senate, where Majority Leader Chuck Schumer, D-N.Y., plans to take it up in December through the reconciliation process, which would allow it to pass with solely Democratic votes.

Additional changes to the legislation would likely be necessary to comply with parliamentary rules in the Senate and to win over reluctant moderates like Sen. Joe Manchin, D-W.Va. Whatever makes it out of the Senate would then go back to the House for a final vote before being sent to Biden’s desk.

“I’m confident that the House will pass this bill, and then we’re going to have to pass it in the Senate,” Biden said at a signing ceremony for a $1 trillion bipartisan infrastructure bill at the White House Monday. “And it’s fully paid for.”

Progressives had stalled a vote on the infrastructure package in the House since August to pressure moderates to support the reconciliation bill. After Democratic election losses earlier this month, they agreed to proceed with the infrastructure vote in exchange for a commitment to consider the Build Back Better Act this week.

Internal tensions appear to have eased since the scramble to secure votes on the infrastructure package, which resulted in the longest House floor vote in modern history. Even without the bipartisan bill as leverage, most moderates have offered tentative support for the reconciliation package, assuming the CBO analysis affirms it will not significantly add to the deficit.

The political landscape is shifting rapidly, though, as President Biden’s approval rating slips to new lows and the apparent Republican advantage in next year’s midterm elections grows. Swing district lawmakers could grow reluctant to take a risky vote on a costly social spending package if negotiations drag on much longer.

A Washington Post/ABC News poll released Sunday found 58% of Americans support spending “roughly $2 trillion” to combat climate change and create social programs. However, the same survey showed a similar percentage are concerned about Biden increasing the size and role of government, and nearly half of Americans believe he bears at least a good amount of blame for inflation.

Other recent polls suggest support for the BBB package has slipped as popular provisions are stripped out of the bill. It is difficult to predict how the final legislation would play with voters if it is passed, and much may depend on how effectively both sides deliver their message about it.

Biden and senior administration officials are set to travel the country promoting his infrastructure investments and social programs in the coming weeks, with the president speaking at a dilapidated bridge in New Hampshire Tuesday. Maloney said House Democrats plan to hold at least 1,000 events across the country before the end of the year touting their accomplishments.

“Some people want us to sell the drive. I want to sell the touchdown,” Maloney said. “And we are in the endzone on the infrastructure bill, and we are on the one-yard-line with Build Back Better.”

Making it across that final yard could still prove more difficult and time-consuming than Democrats anticipate. Narrow majorities mean leadership can afford few defections in the House and none in the Senate, and Democrats need to navigate all this while also keeping the government funded and averting a debt limit default in December.

One area of lingering disagreement is the lifting of a cap on state and local tax deductions imposed by the 2017 Tax Cuts and Jobs Act. The current House bill would raise the cap from $10,000 to $80,000 through 2031, but critics say it would overwhelmingly benefit the wealthy in high-tax states.

Democrats from those states are strongly advocating for the change, insisting many middle-class families would also see savings. Some in the Senate are weighing an income limit for the higher cap, but a proposal has not yet been finalized.

A potentially larger problem: the Labor Department reported last week that consumer prices in October were up 6.2% over the previous year, the highest inflation rate in 30 years, casting new doubt on claims by the White House and the Federal Reserve that surging inflation was transitory. While the causes are complex, some have called for Congress to reconsider spending plans as a result.

“We are in for a prolonged period of higher prices,” said Curtis Dubay, chief economist for the U.S. Chamber of Commerce. “The last thing Congress should do now is add to those pressures.”

Republicans have already mounted an aggressive attack on the reconciliation bill, asserting it would accelerate rising prices and increase the nation’s debt. They have made clear inflation will be central to their midterm pitch to voters, and recent polls suggest it is taking a political toll on the president.

Democrats have so far resisted pressure to slow down or scale back their agenda, recognizing that passing major legislation would only get more difficult in a midterm election year. This could be their last chance to fulfill Biden’s campaign promises, and time is running out.

“The rise in inflation can’t help but complicate the politics on the reconciliation bill, but I believe that Democrats cannot back off,” said Richard Arenberg, a former Capitol Hill senior staffer and author of “Congressional Procedure: A Practical Guide to the Legislative Process in the U.S. Congress.” “They will plow ahead. The bill will be mostly paid for.”

Sen. Manchin dodged questions Monday about whether the Build Back Better bill should be shelved until next year when inflation has cooled. He previously said he would have preferred to wait until the economic effects of earlier spending are clear before advancing another bill.

“We will be talking to everybody, we will look at everything,” he told reporters when pressed on a possible delay.

The Congressional Budget Office expects to complete its review of the House bill by Friday afternoon. However, the nonpartisan office’s director signaled Monday its estimate for the amount of revenue brought in by a proposed increase in Internal Revenue Service enforcement will likely fall far short of White House projections.

According to The New York Times, senior administration officials are already preparing for the possibility the CBO analysis will conclude the bill is not fully funded. A Treasury Department official said there is “a strong empirical case” that the CBO score will be inaccurate, and lawmakers should rely on the White House calculations instead.

If the IRS provision is the only dispute, House moderates have indicated they would be prepared to accept the administration’s word on it. Rep. Josh Gottheimer, D-N.J., told reporters Monday questions had arisen about the impact of increased IRS funding during the debate over the infrastructure bill, and Democrats agreed the CBO analysis was too conservative.

“That would be baked in,” Gottheimer said.

Even if the bill’s programs are fully paid for over the 10-year budget window the CBO and the Senate parliamentarian are focused on, that might not entirely alleviate concerns about inflationary pressures from the boost in federal spending. Some programs would initially be funded for just a few years, and some offsets would not kick in until later.

White House press secretary Jen Psaki insisted Monday “no economist” is projecting the Build Back Better Act would increase inflation. Experts have raised some concerns about the short-term effects of increased spending at a time when prices are already rising at a rapid rate, though, especially if it is not paid for contemporaneously.

“Passing a bill that increases deficits every year at least for the rest of Biden’s first term, when inflation is becoming THE big economic issue politically, seems like a bad call to me,” tweeted Ben Ritz, director of the Center for Funding America’s Future at the Progressive Policy Institute.

The Committee for a Responsible Federal Budget estimated the cost of the House proposal would balloon to nearly $5 trillion if all programs were made permanent, as Democrats have made clear they would like to do eventually. Without additional revenue raisers, it could potentially add $3 trillion to the deficit over a decade, and that may spur further inflation.

Still, many left-leaning economists argue the social benefits of the BBB plan outweigh the fiscal risks, particularly if the White House takes other steps to counter rising consumer prices. Even some who have sounded alarms over inflation defend the reconciliation package.

“Mr. Biden can walk and chew gum at the same time, continuing to focus on inflation while also helping to build a better, fairer and more sustainable economy for future generations,” Jason Furman, former chair of the White House Council of Economic Advisers under President Barack Obama, said in a Wall Street Journal op-ed Monday.

Regardless of what Democrats on Capitol Hill do, experts project high prices will persist well into 2022 amid labor shortages and global supply chain disruptions. That will only make Democrats’ fight to retain their majorities next November harder.

“Voters may not understand what causes inflation and supply chain problems, but they are certain which party they will blame for the relatively higher cost of living: the Democrats,” Honan said.

Whatever political damage Democrats might incur for passing another bill perceived as contributing to inflation, some expect the cost of doing nothing would be higher. Many voters already believe Biden has accomplished too little in his first year in office, and producing results quickly and decisively would give the party something tangible to run on in 2022.

“There are uncertainties about what the CBO score will show, how spooked some Democrats are by inflation, and what will pass muster in the Senate when the parliamentarian applies the Byrd Rule,” Arenberg said. “Nonetheless, all of the congressional Democrats want Biden to succeed and will be looking for a way to get to ‘yes.’”

Nice post. I learn something new and challenging on sites I stumbleupon on a daily basis. Its always helpful to read through articles from other writers and use something from their web sites.

Very nice write-up. I absolutely appreciate this site. Stick with it!