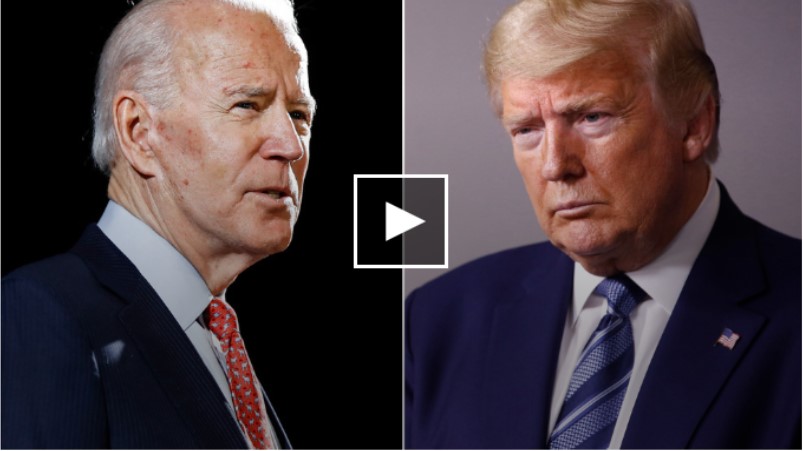 WASHINGTON (Sinclair Broadcast Group) — The Commission on Presidential Debates said Thursday it sees no need to alter the schedule of this year’s debates after President Donald Trump’s campaign called for a debate to be held in early September, citing an expected surge in early voting due to the coronavirus pandemic.

“While more people will likely vote by mail in 2020, the debate schedule has been and will be highly publicized,” commission co-chairs Frank Fahrenkopf, Dorothy Ridings, and Kenneth Wollack wrote in a letter to Trump campaign attorney Rudy Giuliani. “Any voter who wishes to watch one or more debates before voting will be well aware of that opportunity.”

In a letter to the commission Wednesday, Giuliani noted 16 states will have already started voting by Sept. 29, calling the existing schedule “an outdated dinosaur and not reflective of voting realities in 2020.” The virus outbreak has derailed traditional campaign events, severely scaled back both parties’ nominating conventions, and hefted additional significance onto the debates.

“Certainly former Vice President Biden would agree with the need to avoid having millions of Americans disenfranchised by not being able to see and hear the two major party candidates debate before they have ballots in-hand,” Giuliani wrote.

In their response, the commission chairs stressed those who receive ballots before Sept. 29 will be under no obligation to return them until after the debates are held. However, they added if Trump and Biden agreed to an additional debate, they would “consider that request.”

The Trump campaign also provided a list of two dozen suggested moderators, including a number of Fox News and Fox Business hosts, several pro-Trump pundits and radio hosts, and a handful of prominent mainstream broadcast journalists. Biden spokesman Andrew Bates mocked Trump’s campaign for “continually trying to insert his choice of friendly moderators” and asserted that the former vice president intends to attend the three debates the commission has scheduled.

“Perhaps the president should put as much time into managing COVID as he does into this,” Bates added in a statement.

The commission did not directly address any of the Trump campaign’s moderator recommendations, but it told Giuliani it will adhere to its longstanding procedures to ensure moderators are “qualified and fair.”

President Trump continued to press the case for an earlier debate Thursday.

“How can voters be sending in Ballots starting, in some cases, one month before the First Presidential Debate,” Trump tweeted. “Move the First Debate up. A debate, to me, is a Public Service. Joe Biden and I owe it to the American People!”

The Biden campaign rejected earlier efforts by Giuliani and the Trump campaign in June to schedule more debates and hold them sooner. At the time, the Commission on Presidential Debates said it would do everything it could to set up a fourth debate if both campaigns wanted it.

The coronavirus outbreak has already upended debate planning, with the first two presidential debates changing venues, and the events are likely to have smaller live audiences and social distancing restrictions in place. Both campaigns have urged the commission to finalize contingency plans and logistics in case other obstacles arise, and some Democrats agree a schedule change is a valid suggestion.

“The presidential debates should be moved up in the schedule to reflect large numbers voting by mail and must include questions from real people – whether they are in the audience or not,” said Democratic strategist Bradley Honan.

According to Aaron Kall, director of debate at the University of Michigan—which was originally scheduled to host the second Trump-Biden debate but canceled due to public health concerns—an earlier debate makes sense in theory, but it could be difficult to pull off in practice.

“We’re pretty late in the process to make this kind of proposal,” Kall said. “These debates, the organization in a regular year is quite complicated. It’s even more complicated when you’re in the middle of a pandemic.”

During Wednesday night’s “Team Trump Online” webcast, Trump adviser Mercedes Schlapp claimed the Biden campaign is “nervous” about the debates and is trying to hide the candidate from the public until millions of votes have already been cast.

“God only knows he avoids every single softball interview, he never has a press conference, he lives in his basement, he’s hiding and dodging and we don’t know what he stands for publicly,” Schlapp said.

Biden held a press conference last week, but his campaign schedule has been limited due to the pandemic and he announced Wednesday he will not travel to Milwaukee to accept the Democratic nomination in person later this month. A new Trump campaign ad uses misleadingly edited images to depict Biden as “hiding” in his basement and “diminished,” and resisting debates could feed that narrative.

“You can’t run for president of the United States and show signs of debate phobia,” said Republican strategist David Payne. “You have to show up and fight. There’s simply no precedent for trying to duck out on this. And doing so would only look like one thing: cowardice.”

Some Trump supporters have already begun making that case, even though Biden’s campaign has given no indication he is considering backing out of the debates.

“If Biden refused to debate Trump, America’s enemies and adversaries would interpret this as a sign of weakness,” Fred Fleitz, a former Trump National Security Council aide, wrote in a Fox News op-ed Thursday.

A few Biden supporters have publicly suggested the former vice president should refuse to debate unless President Trump releases his tax returns or just decline to attend outright. However, the campaign stressed Biden has committed in writing to attending all three debates the commission has announced, while the Trump campaign has provided conflicting answers on whether he has formally agreed.

Late last year, the Trump campaign warned the debate commission the president might decline to participate if the process of selecting moderators was not “fair.” As Biden’s lead in the polls has grown, though, the president’s aides and allies have come to see the debates as an opportunity to shift the dynamics of the race and convince voters Biden is an absent-minded tool of the radical left.

A candidate refusing to attend general election debates would be unusual but not entirely unheard of. In 1980, President Jimmy Carter skipped one debate because a third-party candidate was invited, but since the Commission on Presidential Debates was established in 1987, both major party candidates have participated in every scheduled debate.

Agreeing to an earlier debate would carry political risks for Biden, but it could test Trump too. Neither candidate is at his best in unscripted situations and both have a track record of uneven debate performances, and mistakes made on the stage could be magnified in the current pandemic-stricken political environment.

“Waiting for your opponent to lose a debate is not good strategy,” Payne said. “Biden’s public speaking is borderline incompetent at this late stage in his career. But Trump also tends to make his biggest unforced errors when speaking without a script.”

The debates might be the final chance for either candidate to alter the trajectory of the race, but Kall questioned the Trump campaign’s confidence that they will benefit him—particularly the first one. Polls indicated he fared poorly in the 2016 general election debates and he is out of practice four years later. As President Barack Obama demonstrated in 2012, the first debate can be rocky for a president whose debating skills are rusty.

“Historically, certainly in the first debate, which is always the most-watched debates, incumbent presidents don’t do very well,” Kall said.

With Biden largely avoiding adversarial venues in recent months, though, Payne expects the former vice president will also struggle when he finally comes face-to-face with Trump. While the Democratic primary debates were often contentious, Biden’s opponents were not nearly as confrontational and hostile as Trump is expected to be.

“Trump’s approach is to project confidence even when the political fundamentals are shaky under his feet,” he said. “He will go on the attack, change the subject, and hit Biden where it hurts on things like his family’s money-making in Ukraine and China.”

According to Honan, the debates present a clear challenge for Biden, but withstanding Trump’s attacks and cogently laying out his own agenda could help put to rest doubts about his mental acuity and bolster enthusiasm for his campaign.

“Trump is going to make minced meat pie of Joe Biden in the debates they have,” he said. “The stakes are very high for Biden to show he really is with it and able to offer a vision for his America – and not just be the anti-Trump candidate. For Trump, the stakes are equally high – this may be his last opportunity to turnaround his flagging campaign and finally put Biden on the defensive.”

Despite being among the most-watched television events of an election year, presidential debates rarely have a significant impact on the race. They may produce memorable moments, but in an increasingly polarized nation, they are not typically decisive for voters.

Kall acknowledged this year might be different because there are so few other high-profile moments left on the calendar before November. However, he observed Trump won in 2016 despite the debates because of other factors, and there are some very big issues hanging over the 2020 race that might matter much more to Americans casting ballots early or on Election Day than how either candidate performs in the debates—regardless of when they are.

“The debates are never going to trump the coronavirus and the economy,” he said.