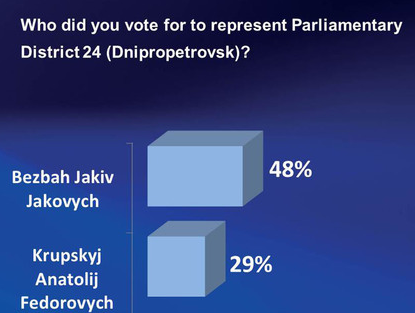 According to the exit poll, Jakiv Bezbah received 48% of the vote compared with 29% for Anatolij Krupskyj.  All the other candidates received single digit support.

“Our exit poll interviewers worked at over half of the polling locations in the district and surveyed a significant portion of today’s voting electorate. KRC’s exit poll from Parliamentary District 24 gives us a very clear and vivid indication of the election results.  Jakiv Bezbah won a decisive victory today,” said Bradley Honan.

Throughout the day, in polling places across the district, 3,000 voters were randomly selected at 45 polling locations. Interviews were conducted by two separate Ukrainian public opinion pollsters who both gave voters a self administered survey to fill out.  The Exit Poll was made available in both Russian and Ukrainian.  The overall margin of sampling error is +/- 1.8%.

Mr. Honan is in Dnipropetrovsk and available to speak with the media about the results. Mr. Honan can be reached at 1-917-515-3208.

About this researchThe District 24 exit poll was conducted in 45 voting locations throughout the district. The locations were selected to be a representative of the district.  In these centers, 3,000 voters were interviewed. Voters were selected at random by a systematic procedure. Refusals and non-response was registered. Those voters who were randomly selected to participate in this exit poll were asked to indicate their vote on a small ballot which they could then personally drop into a large envelope in order to maintain secrecy and anonymity. Data was sent by exit poll workers to a central facility in Dnipropetrovsk and Kiev and KRC Research for processing, tabulation, and verification.

About KRC ResearchKRC Research is a full-service market research firm that specializes in the kind of research needed for effective communications—communications that reach, engage and persuade. A unit of the Interpublic Group of Companies (NYSE: IPG), KRC Research offers the quality and custom service of a small firm along with the reach of a global organization. For over 30 years, KRC Research has worked on behalf of corporations, governments, not-for-profits and the communications firms that represent them. Staffed with market research professionals from the worlds of political campaigns, consumer marketing, journalism and academia, we are flexible, practical, creative, knowledgeable and fast, combining sophisticated research tools with real-world communications experience. For more information, visit www.krcresearch.com.